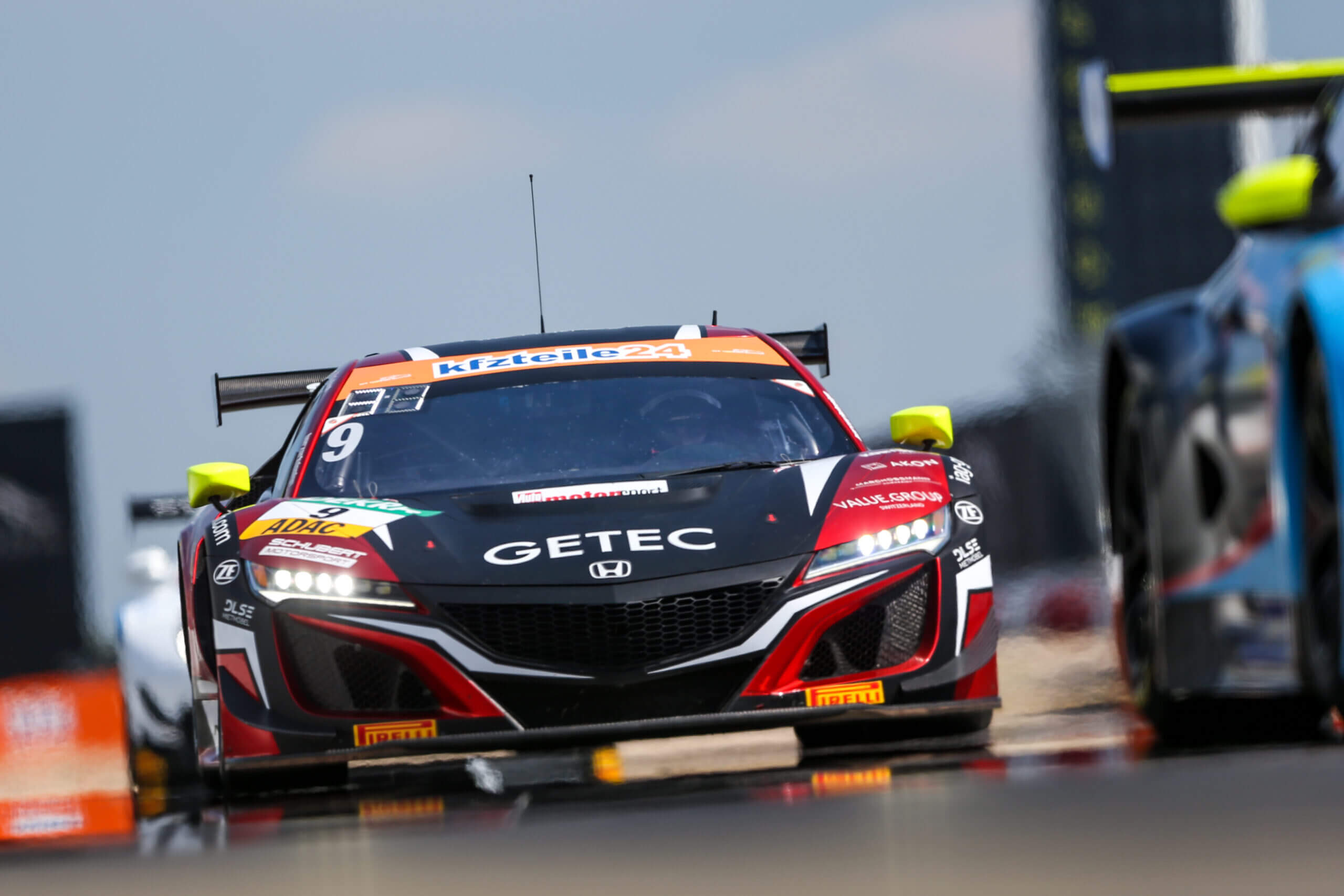 Giorgio Maggi could hardly have got the second half of the 2018 ADAC GT Masters season off to a better start. The Swiss 20-year-old secured a P6 finish in Saturday’s race at the Nürburgring. What’s more, he and his Honda Team Schubert Motorsport co-driver Christopher Dreyspring at last made it into the Top Three of the Junior classification.

It was also the first ever points finish for the 550bhp Honda NSX GT3, which is making its debut in the 35-strong starting line-up this year. Maggi and Dreyspring were promoted to sixth following a late penalty for the duo who had finished just ahead of them. The decision also gave Maggi a well-deserved trophy for third place in the classification for newcomers in the ADAC GT Masters, which he received before the race on Sunday.

The two talented Juniors had already shown their potential in Friday’s free practice session by setting the fourth-fastest time. On an extremely competitive grid, the Honda NSX GT3 qualified twelfth for Saturday’s race. Maggie’s team-mate Dreyspring was a mere 0.363 seconds off pole position.

After the best qualifying result so far in the ADAC GT Masters, Maggi and Dreyspring put in an impeccable performance in front of more than 20,000 spectators. Maggi took over the Japanese super sports car in eighth place and subsequently gained one position to cross the line in seventh, thereby paving the way for the later junior podium.

After Saturday’s gratifying performance, the Honda Team Schubert Motorsport had a frustrating Sunday. Qualifying produced a disappointing P31 which Maggi and Dreyspring then converted into a 23rd place. The charge through the field which yielded eight positional gains was a minor consolation after the heroics of the day before.

Maggi’s ADAC GT Masters race duties continue in two weeks at the ‘old-school’ Zandvoort circuit in the Netherlands (17th – 19th August), the fifth of seven race weekends in the Super Sports Car League. It will be his first outing in a GT3 racing car on this challenging circuit set amid the North Sea dunes on the Dutch coast.

Giorgio, congratulations on your best result in the ADAC GT Masters to date. Are you satisfied?
Essentially, I’m never satisfied unless we actually win the race. But I have to say that P6 was a great result. For the team, it came as an immense relief and also as a tremendous reward for all the hard work over the past few months. We have always had plenty of potential, but we’ve mainly been out of luck. This time, it worked out really well. We had a trouble-free race and extremely strong pace.

You took over in the car for the second half of the race. How did it go from your perspective?
The pit stop was really good. I emerged onto the track in eighth place behind a Mercedes and in front of a Porsche. For the first few laps of the stint, I had a fight on my hands, a real ding-dong against drivers who have much more experience in a GT3 car than me. I have to admit that I was sweating profusely during those laps. Then the safety car was deployed. My restart was by no means perfect, but I managed to gain a position and finished seventh.

Had there been any indications before the race weekend at the Nürburgring that you would be so competitive?
Frankly, no there hadn’t. The official test on Thursday didn’t go all that well. The setup was not optimal at the beginning. But that’s not surprising – it was after all the first time we had taken the Honda NSX GT3 out on the Nürburgring. I would like to express my sincere gratitude to the team: within only a very short time, the guys managed to work out a very good setup for the weekend. As you can see, we are a young but very ambitious team. I am sure that will continue in the upcoming races.

You were unable to build on your Saturday performance in the Sunday race. What happened there?
There was definitely something wrong on Sunday. We now have to analyse precisely what didn’t go right in qualifying. P31 on the grid was not the result we had expected. Starting from so far back, it was difficult to make any significant progress through the field. Unfortunately, we were never going to finish any higher than 23rd. Compared to Saturday, we lacked the pace and we were struggling more with the car. We need to draw our conclusions from this and come back stronger for the next race.

The next race weekend is at Zandvoort. It will be the first time that you have driven a GT3 car there. What are your expectation in the Netherlands?
I only know Zandvoort from my first season in single-seater racing. Of course, driving a fast GT3 car on this track is a whole different story. I’m looking forward to Zandvoort, because it’s a really cool track with very special characteristics. In addition to the challenging layout, you also have sand drifting onto the track, which makes driving even trickier. It’s a great challenge for a racer!