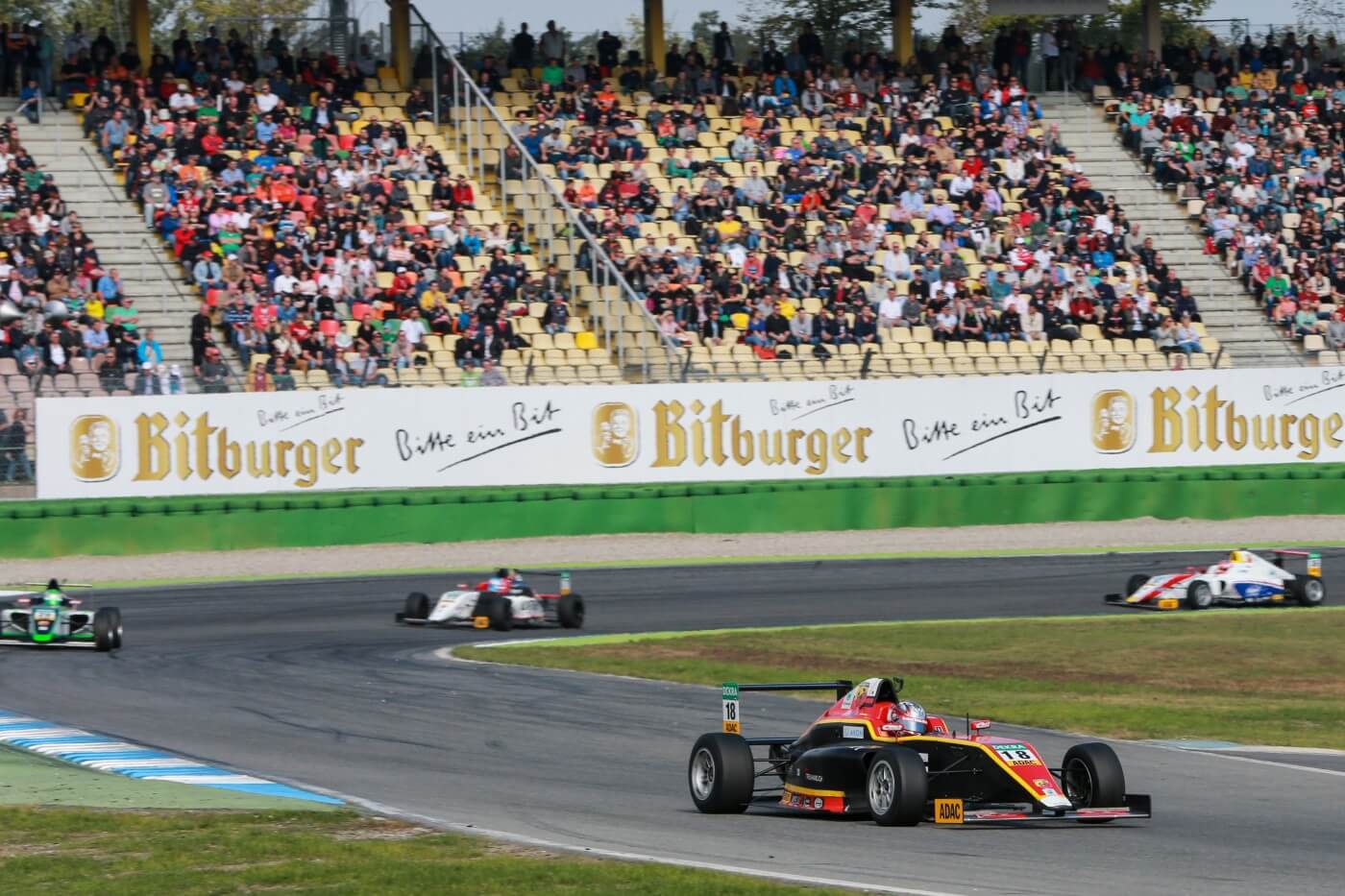 Race stoppages, safety-car periods, tricky conditions and Giorgio Maggi in the middle of it all. The Swiss driver lined up last weekend for the ADAC Formula 4 season finale at the Hockenheimring. Fielded by Swiss outfit, Race Performance, he tirelessly fought his way forwards, but technical problems and a spot of bad luck prevented a points-scoring finish.

The final weekend did not go quite as you’d imagined. What happened?

It first kicked off in qualifying. I fought and really squeezed the maximum out of the car. However, it was impossible to place higher than eleventh in my group. We compared the data and think that we lost engine power. We immediately set the wheels in motion and spoke with the technicians responsible, but it wasn’t possible to find a real solution. So, the problems also reared their head in the race. I got away well in the first race and immediately moved up a few positions. I was already in P16 by the time the safety-car came out. I then managed to go up a few more places before the car’s performance dropped off again. I was fighting with two hands behind my back and was easy meat. 25th place was really frustrating after such a strong start.

You improved considerably in the second race. Was P20 a reasonable result after all the difficulties?

You might look at it like that, perhaps, but I’m a racing driver and could never be satisfied with a result like that. The race was tough from the very first. I needed to get away to a cracking start and gain a bit of ground in view of my grid position. I was playing with the clutch, looking for the biting point when I set off and rolled forwards a little. Alarm bells rang in my head. After all, I didn’t want a false start. So I immediately stepped on the brakes, and then, at that precise moment, the lights went out. It couldn’t have been more stupid, because obviously, lots of cars overtook me. Numerous safety-car deployments then made it really difficult to move back to the front. Nevertheless, I had some lovely scraps and gained five places.

The final race was also a challenge as a result of the rain that fell prior to the start.

It certainly was! The rain had indeed stopped, but the track was still very damp and slippery off the racing line. Unfortunately, I was totally on the wrong side of the grid and my wheels spun as the lights went out. Still, I managed to leave one or two competitors behind. The re-start after the safety-car went well, and I was in P21. I wanted to attack again in the Sachskurve when I ran out of track, unfortunately. I ended up on the astroturf, and the tail broke away. I fought with the steering wheel and tried everything, but my race was over. I was very disappointed, because I’d intended to achieve a decent result to end the season.

You mentioned interruptions caused by the safety-car a moment ago. How difficult is it for you as a driver to maintain concentration at such times?

I’m well trained – physically and mentally – so it’s not a problem. It’s simply tedious, for sure. A couple of times, I was in a scrap and about to overtake, only to be told on the radio that the safety car was coming out. It’s important to keep the tyres warm by accelerating, braking and steering in quick succession. You have to continually ask yourself: Are they getting too hot? Do I need to let them cool, or do I perhaps need to warm them up a bit? Plus, the re-start has to go well. Once the safety car heads for the pit lane, your concentration has to be back at 100 percent, so as not to be left behind, or maybe so that you can perhaps even overtake an opponent.

The season has now ended. How would you sum up your 24 races?

It was a tricky year in which I’ planned to do much more, quite frankly. A lot has gone on in the background that hasn’t made the situation easy. I changed teams in between the weekends at the Lausitzring and at the Nürburgring and had to attack without testing. That was a huge challenge, but working with Race Performance has been tremendous fun, and we were able to quickly make progress. I’ve continued to develop during 2015, especially on the technical front and can give my mechanics and engineers better feedback. A big thank you obviously goes to everyone for their great support this season, to my team, Race Performance, my coach Yannick Mettler, to my parents and last but not least to all the fans. At any rate, the experience I’ve gained and the continuous support I’ve received have given me the strength to tackle future tasks.