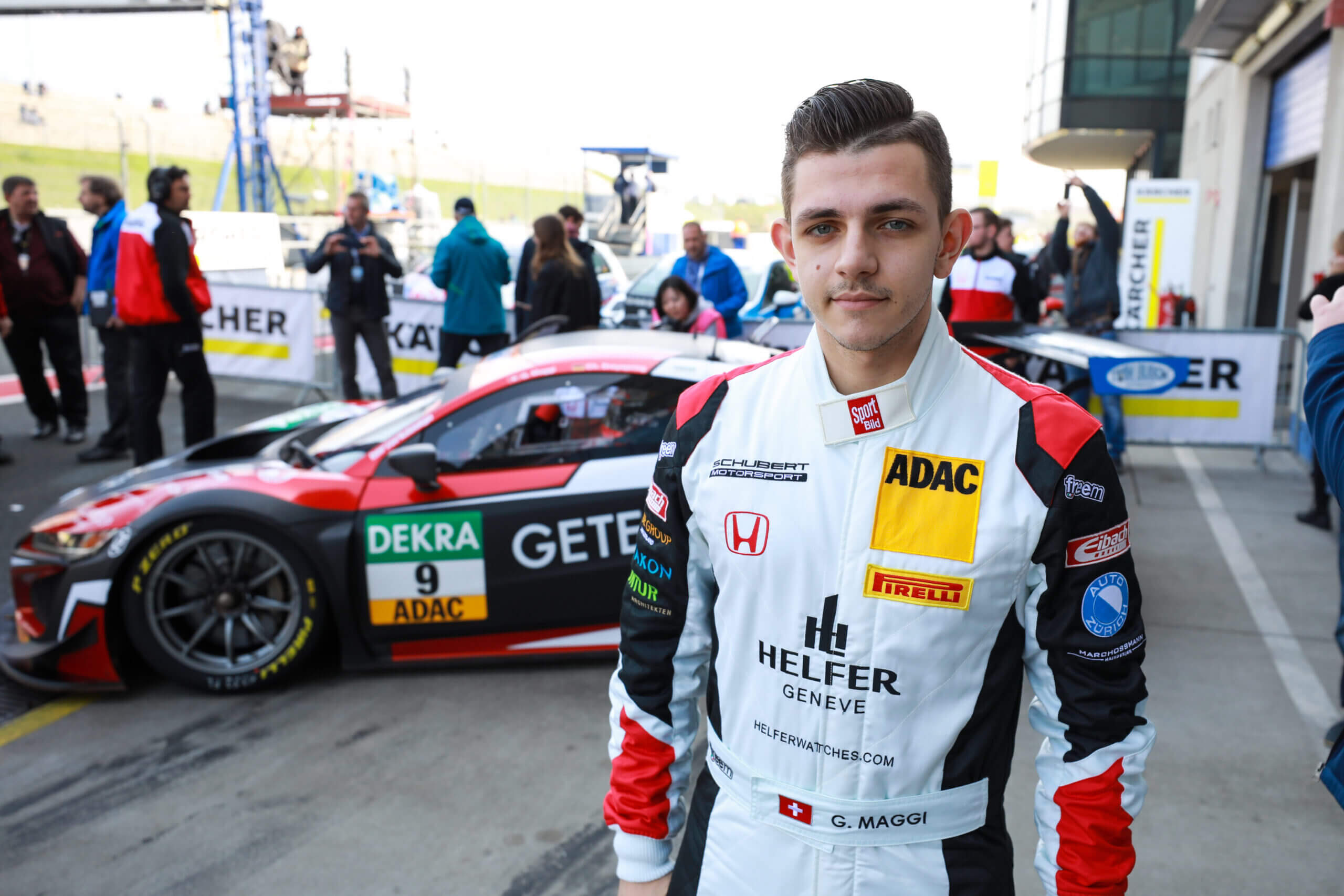 The ADAC GT Masters GT3 cars haven’t turned a wheel for 202 days, but the long wait finally came to an end at Oschersleben last weekend with the first races of the new season. Series newcomer Giorgio Maggi was there along with partner Christopher Dreyspring and Team Schubert Motorsport as 25,000 fans spectated (over the weekend). They did really well, particularly in the second race on Sunday, going on a superb charge up the field, which ended with 24th place.

All the ingredients for a fine finish were there in the first race, but Maggi was hit by racing bad luck after the driver changeover and was forced to retire early. Things went much better for rookie pairing Maggi and Dreyspring in Race 2. Their position in the rear third segment of the field may not have been the most favourable, but Swiss driver Maggi went on a terrific charge and gained several positions. He and his new team, Schubert Motorsport, had made a successful start to the season as the outfit returned to the ADAC GT Masters.

The next race will take place in just under two weeks’ time in Most in the Czech Republic (27th – 29th April) where Maggi and his team intend to continue in positive fashion. Sport1 will broadcast all the races and qualifying sessions on free-to-air TV. Coverage will also be available as livestream at sport1.de, adac.de/motorsport and youtube.com/adac.

You went on a strong charge in Race 2, gaining 11 places in all. How did the race go from your point of view?
Really well! I took the wheel in qualifying and drove the first stint. I was much quicker than the cars in front of me immediately after the start, but overtaking was really difficult. I ultimately took advantage of mistakes made by the others in front of me to go past. We also managed the driver changeover pretty well, and then Christopher wrapped things up. This was a great team effort, on which we can certainly build.

You got away well in the first race but didn’t finish. What happened?
Christopher made a good start from 16th on the grid, and our pit stop went well. A Porsche spun right in front of me after the changeover, and I had to take evasive action. While doing so, I picked up bits of tyre debris, so-called marbles that littered the track next to the racing line. I got into a scrap with a fellow competitor in the triple turn and lost the rear-end. There was no contact, but the car was very twitchy due to the marbles I’d picked up, and I was unable to prevent spinning off into the gravel. Unfortunately, that was the end of our race.

Have you now got used to the Honda NSX GT3?
Things are going very well after much testing and many race kilometres, but we’ve still got plenty of things that we can try out to really get to know the car and improve it. The Honda’s performance to date makes me feel very positive. Of course, there’s still some potential for improvement on the technical side and as far as we drivers go. We just have to keep working hard, but I’m pretty confident that we can deliver on race weekends.

You’ll be heading to Most in the Czech Republic for the next race weekend (27th – 29th April). What’s your impression of the track there?
So far, I only know it through onboard footage from a couple of GT3 cars. I’ve never driven there myself and am wondering how the races will turn out on this narrow track. We’ve got another day’s testing before the race weekend, which we’ll use to find the braking and turning-in points and to get really well prepared. I’m going to focus on work in the simulator beforehand, which should, hopefully, save me some time getting accustomed to the track during testing.