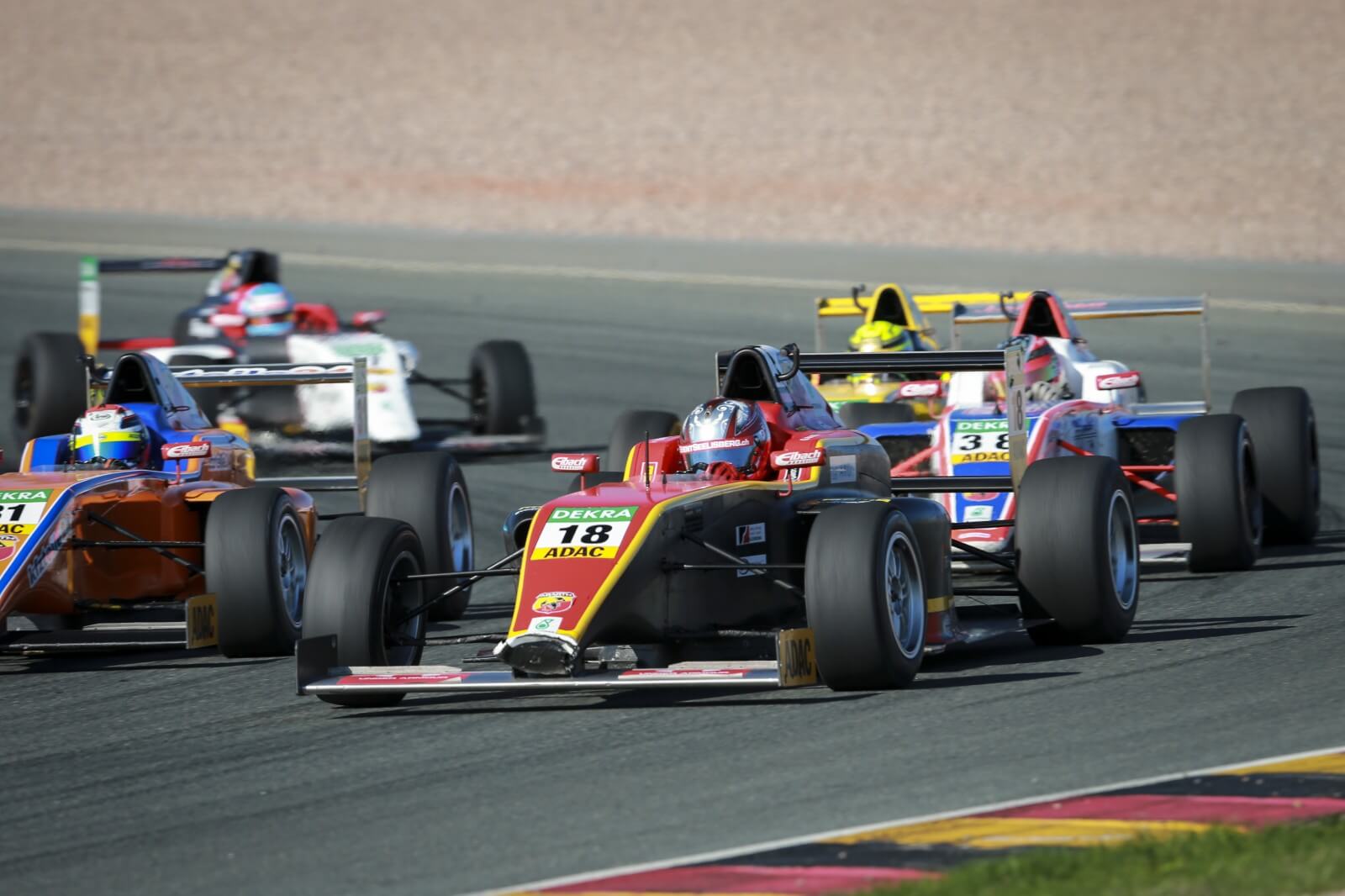 Pouring rain, a challenging track and race luck that proved elusive. Last Saturday and Sunday at the Sachsenring, Giorgio Maggi was competing on the sixth race weekend of the 2015 ADAC Formula 4. The Swiss youngster was especially impressive in the rain-affected practice sessions on Friday. But his luck was out in qualifying and in the races, as this strong showing was not reflected in actual results.

In the two free practice sessions, you impressed everyone with a P7 and a P4. Your start to the Sachsenring weekend could hardly have been better…

Yes, it got off to a great start. My pace in the rain was perfect from the first moment, and we were always up with the front-runners. I didn’t have a test day at the Sachsenring, but we at least decided on the basic setup on the previous Nürburgring race weekend, and that worked well here. Between the first and the second session, we made a few small changes, and everything was spot on.

But for one reason or another, you were unable to carry forward your excellent form from free practice into qualifying. What was the problem?

It was extremely annoying. I got stuck in traffic right at the start, so I allowed a gap to build up ahead of me in order to get a clear lap in. But as soon as I was all on my own, the red flags came out. When qualifying resumed, I spent two laps warming up the tyres and was starting to push again when there was yet another interruption. This went on until the end of the session, and I was unable to qualify any higher than P20 on the grid for both races. After such a good performance in free practice, that came as a real disappointment.

After the two races on Saturday, you said a big ‘thank you’ to your team…

I went into the first race at the Sachsenring feeling highly motivated, and I applied a lot of pressure – possibly too much. I strayed onto the grass and ended up in the gravel. That not only put an end to my race but also threatened to keep me out of action in the afternoon. The car was damaged, and we were involved in a race against time. My team completed the repairs only at the last moment, and I had to go straight out onto the track without any prior calibration or setup adjustments. I tried to make some adjustments myself on the way to the grid and while I was waiting for the start, but at that stage not a lot was possible. I was just relieved to be competing at all in the second race. I have to thank my mechanics for that; they really worked like crazy, so thanks again! Under these circumstances, 17th place was quite a decent result.

In the third race, you staged a magnificent charge up the field. What’s your assessment of the weekend as a whole?

I got off to a pretty good start and moved up from 28th to 18th. I had a lot of scraps and one or two bumps along the way. The frequent safety car deployments made it additionally difficult. I would be fighting for position and then hear on the radio that the safety car was coming out. Each time, I would have to get the tyres up to temperature again, and also the engine kept overheating. With the grid position I started from, a P20 finish was quite OK. Overall, we got pretty close to the ideal setup over the weekend, as the lap times demonstrate. I firmly believe that we will steadily improve our performance.

The Sachsenring is one of the biggest challenges of the season. Would you also subscribe to that opinion?

First of all, I have to say that it’s incredible fun, both in the wet and in the dry. At the same time, it poses a real challenge for us drivers. You’re going uphill and downhill, and there are fast and slow corners, some of them blind. The double bends are a special feature – you have to position yourself correctly on the first turn to get the second one right. I remember how tricky it was the first time I competed on this track. Since then, my experience has of course been immensely helpful.

The upcoming races at Oschersleben will be rather special because you’ll be driving in the context of the DTM.

It’s going to be fabulous! I’ve been to DTM races as a spectator, and I’m thrilled that we’ll be competing at the same venue on the same weekend. My expectations for the races are quite high. We tested there before the season commenced, albeit as a member of another team, but the setup we devised there is for the most part transferrable. It will be very interesting to go back to a track where we have already contested races this year. It means that we can make direct comparisons and see which teams and drivers have improved since the beginning of the season.