Scorcher of a battle at Lausitzring: Promising start unrewarded 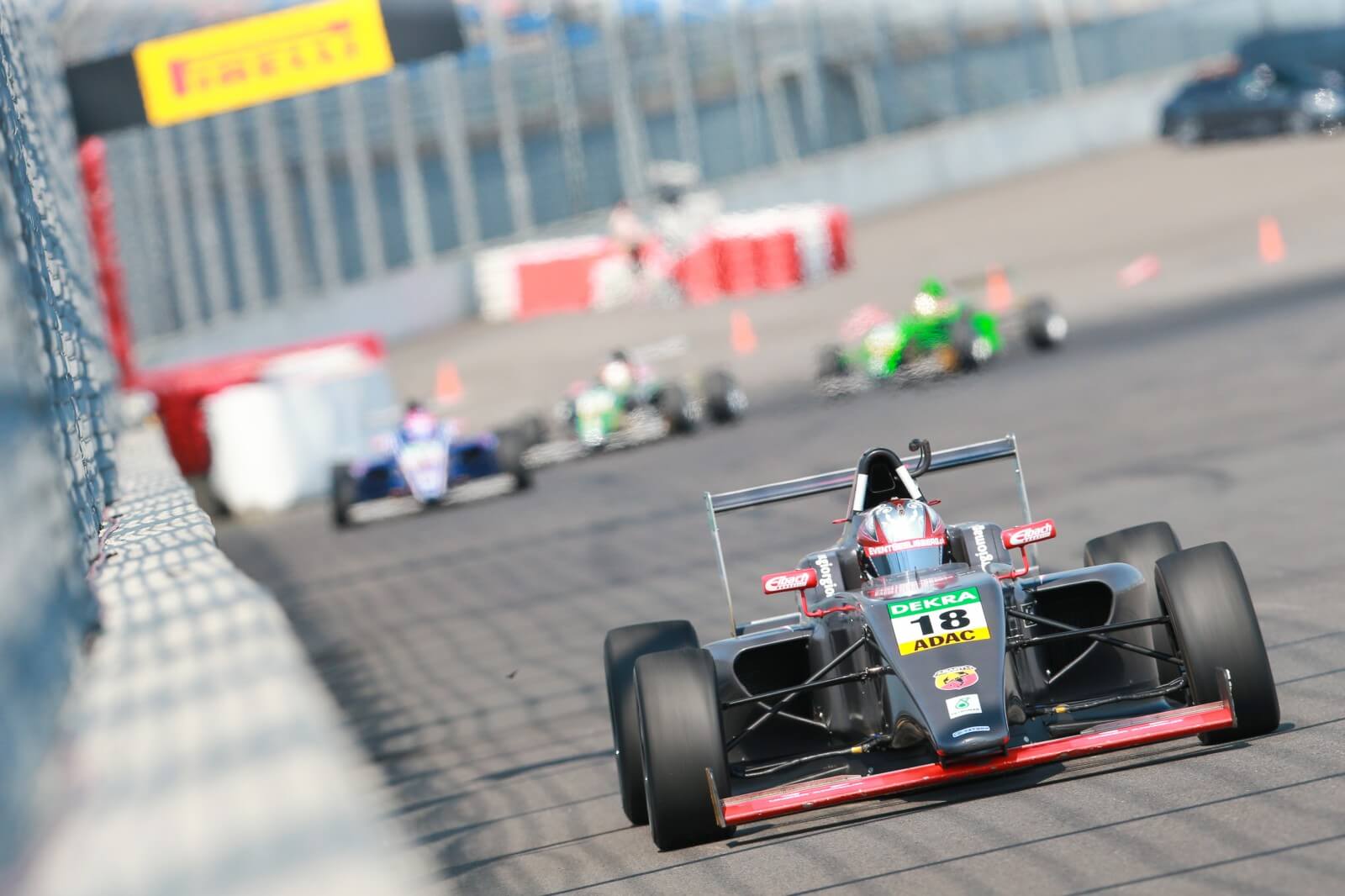 In the heat of the Lausitzring. Things were hot for Giorgio Maggi at the fourth race weekend of the ADAC Formula 4 at the Lausitzring! The Swiss driver experienced ups and downs in record temperatures. Giorgio just missed finishing in the points along with his team, Swiss SMG Motorsport Group.

Giorgio, eleventh place on the grid in a field of 34 cars is a decent performance, so why was the result doubly annoying?

This is now the third time this season that I’ve finished a race in eleventh place, just narrowly missing the points. This time it was even more annoying, since tenth place would have given me pole position for the third race because of the rules. I got a good start in the first race from 14th on the grid and improved a number of positions. I was eleventh when the safety car came out on track. At the restart, I knew what I had to do. I was even able to claim tenth place but then had to use the run-off area to avoid a collision while battling for position. That cost me the valuable tenth place, unfortunately.

The rest of the weekend was not easy after that promising start. Would you sum up the second and third race for us, please?

Well yes, in a word, rubbish! My race didn’t get off to a good start from P21 on the grid. It was a bit confusing in the beginning after we had to run an extra formation lap. For some reason, a few marshals were waving yellow flags, and the driver in front of me eased off the accelerator. Consequently, I was also forced to slow down and lost a few places. I had to fight hard and was able to work my way forwards a little, but my race was virtually over following the braking mistake. It didn’t go much better in the third race, as a fellow competitor ran into my car’s left rear, damaging the wheel. We decided to park up the car after two laps as a precaution.

This was the hottest weekend of the year with temperatures nudging 40 degrees. How did you cope with the extreme conditions?

The heat was exhausting, but I was fully focused right through to the last race. My training and experience have definitely paid off. A couple of other drivers were certainly struggling with the heat, which also probably contributed to one or two incidents out on track. Racing here was made all the more difficult, because there are no long straights where you can relax a little. I coped well with the heat, but I’ll be pleased if it’s a little cooler again for the next races.

You have now completed four out of eight race weekends this year. How are things looking in the interim as regards results?

I’ve finished in the points a couple of times, but I expected more before the start of the season. You mustn’t forget, though, that we are a young team and have much to learn. We’ve developed our teamwork really well during the first half of the season and have also got setup right on more occasions as time progressed. If we can now get down to business in qualifying, then the second half of the season should go much better. Our race pace looks pretty good. What we lack are test kilometres. Some other teams have an advantage in that respect, it has to be said, as we sometimes need a bit longer to find the right settings for the car at race weekends.

And where do you personally think there is still room for improvement?

Although I have some experience of formula racing, the Formula 4 racing car is a completely fresh challenge even for me, so I make one or two small mistakes with my driving here and there, which at the end of the day can make the difference in this huge of field starters. I have to work on becoming more consistent – especially on a hot lap. My sector times are good and comparable to those of the front-runners. In the end, the overall result has to be right, so as to be well up front in qualifying. That is the key to a successful weekend. If you have to start outside of the Top Ten, then you’re going to struggle to achieve a good result. I hope to get a few chances during the summer break to do some testing in order to continue working on my overall performance. In addition, a Formula 3 test is planned with a view to my future career path in motorsport. That would be a great experience which would also certainly benefit me this season as well.