P23 in ADAC GT Masters season finale at the Hockenheimring 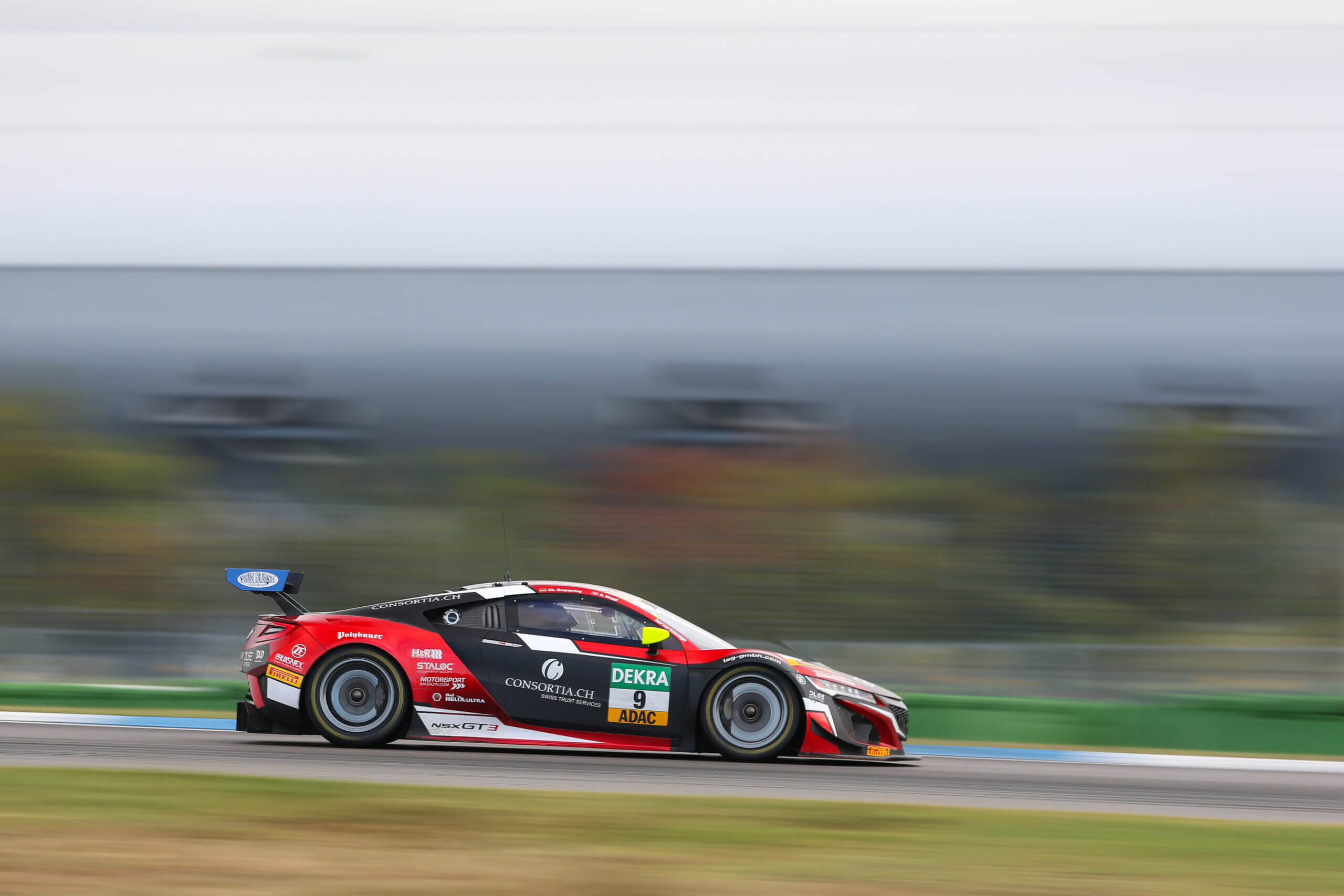 The grand finale to the ADAC GT Masters season took place last weekend at the Hockenheimring, and Giorgio Maggi and Honda Team Schubert Motorsport were at the circuit to contest the last Super Sports Car League meeting. 25,000 motor racing fans came to the historic track to watch the two thrilling, action-packed races that brought the season to a close. Maggi and team-mate Christopher Dreyspring took 23rd place in the final race of the year but did not see the chequered flag in the first race on Saturday.

The poor weather that had been forecast for the weekend did indeed materialise and had a major impact on the performance of some of the teams, including Honda Team Schubert Motorsport. The first two of Friday’s three practice sessions were held in the dry, but the 60 or so ADAC GT Masters drivers had to struggle with a damp track in their 550-bhp sports cars later on in FP3.

Maggi’s team-mate finished first qualifying in P30, but they were bumped up one position when a fellow competitor was handed a penalty. The team made a great start to the race. At the end of the first lap, the only Honda NSX GT3 in the field was already in 17th place. The driver handover went really well, but the car would not restart when Maggi was ready to leave the pits. A complete reset failed to solve the issue. The team had already lost over three minutes to the competition, and so, decided to end the race there and then.

Difficult conditions in qualifying made it impossible to qualify higher up the grid than 30th. The second qualifying session was like a lottery, and Honda Team Schubert Motorsport did not have that little bit of luck they needed. Swiss diver Maggi went out to qualify on wet-weather tyres. He did quite well, was consistent and fast. However, the track dried out very quickly. The decision to switch to slicks was made too late, so Maggi had only one attempt at posting a top time on slicks. A small mistake in the first corner cost him dearly, otherwise, his lap would have been good enough for the sixth or seventh row. In the race itself, Maggi and Dreyspring still managed to move up into P23.

Maggi and his team-mate ended their debut season in the ADAC GT Masters in 34th place overall and in P18 in the Junior classification.

Giorgio, how would you sum up the season finale?
We had hoped to achieve more to conclude the season, for sure. It’s hard to accept that a technical defect in the first race messed things up for us. We were going well, and Christopher was already 17th when he came in for the driver changeover. The start of the second race was very chaotic, so we did OK to move up from 30th to 23rd. However, it would have been nice to finish the season with more points.

How did the races go from your perspective?
Christopher got a good start and went up from 29th to seventeenth place. He had a very solid race after that and held his position until the driver handover. The pit stop went smoothly. I was ready, and we were doing very well with time, but the car wouldn’t restart. I pressed the starter button several times, but nothing happened. We then did a complete reset, which, unfortunately, didn’t help. Nothing doing! The mechanics then pushed the car back into the pits, and suddenly, we got the engine running again, by which time, we had already lost nearly three minutes. We therefore decided to end the race there and then.

You improved by seven places in the second round…
Yes indeed. Things went better, even though the start was pretty chaotic. I had a great scrap with a Lamborghini first off where it was nip and tuck. I had to struggle both with under and oversteer during the rest of my stint, which is obviously no easy task when you are constantly having to drive on the limit. Ultimately, P23 was OK, although of course, we know that a couple of cars in front of us had to retire.

How would you sum up your first season in the ADAC GT Masters?
The field of drivers in the ADAC GT Masters is definitely a very exciting one. I’ve competed mainly in endurance racing these last few years, so contesting the season in a sprint series like the ADAC GT Masters with a new team and a new car was very exciting. However, as this was the car’s first season in Europe, we hadn’t had time with it, were down on practice and lacked experience. We didn’t have any data for the various racetracks either. Of course, we were very ambitious and expected to do more, definitely. Honda Team Schubert Motorsport are an excellent outfit, and everyone in the team fought hard to achieve success. Even if things didn’t go as planned, my conclusions are very positive.