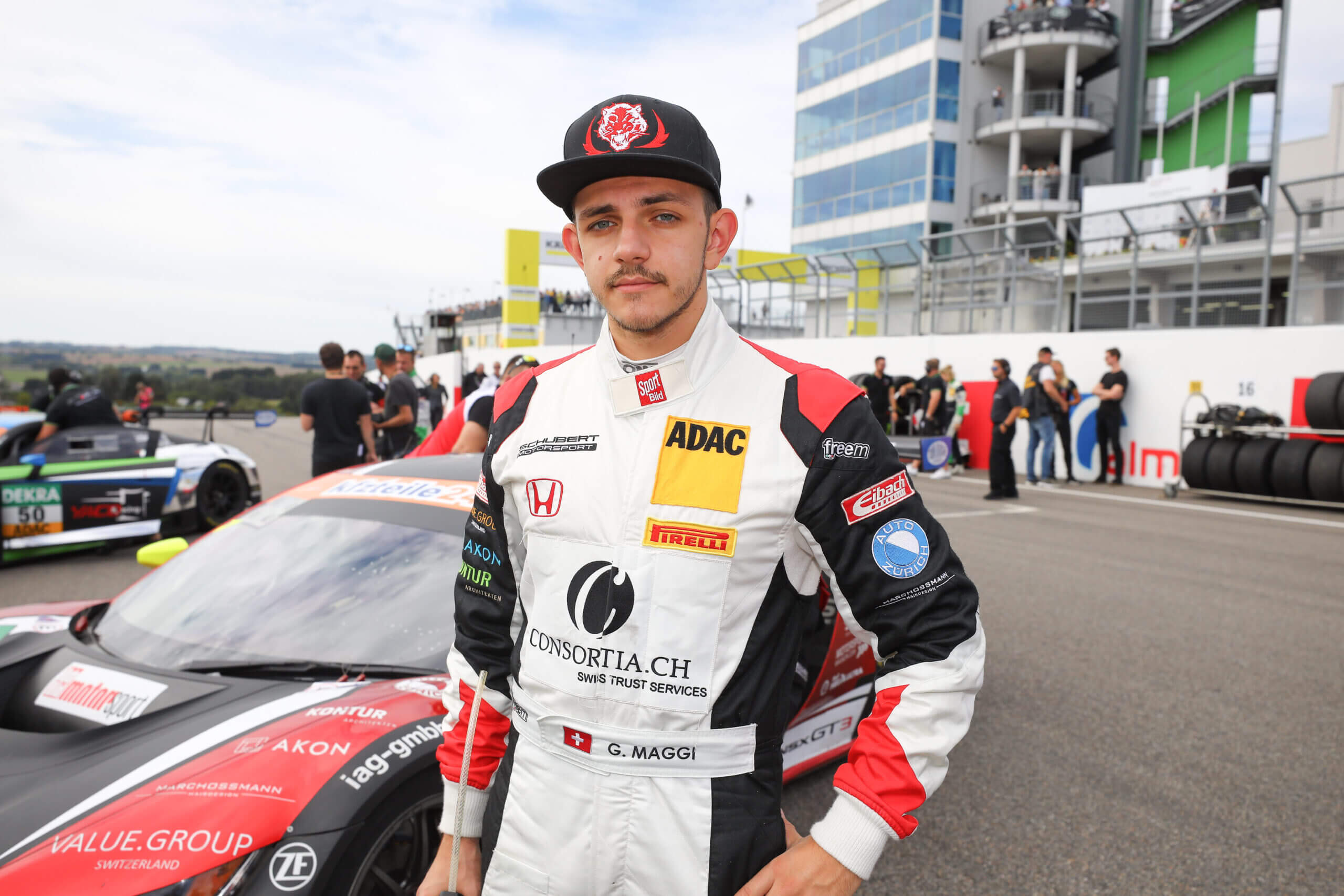 More than 20,000 spectators turned out at the Sachsenring last weekend for the sixth and penultimate fixture on the 2018 ADAC GT Masters calendar. For Honda Team Schubert Motorsport driver Giorgio Maggi, the two races in the Super Sports Car League at the world-famous MotoGP race track near Hohenstein-Ernstthal once again proved to be highly instructive.

The race weekend got off to a less than ideal start. On a rain-affected Friday, Maggi and his team-mate Christopher Dreyspring were able to spend only a limited amount of time acclimatising themselves to this new and challenging circuit. In the first quali, the duo booked P22 in a line-up of 34 entrants.

The first race was encouraging in the initial stages. After the driver change, Maggi was respectably placed in the midfield but increasingly struggling with tyre wear. The 20-year-old Swiss eventually paid the price for having spent the second half of his stint in the main bunch, and the number 9 Honda NSX GT3 was ultimately able to finish no higher than 26th.

For the second race on Sunday, Maggi qualified in the 17th row. In a chaotic opening spell, he successfully steered clear of the numerous collisions. But later on, as he was about to make his pit stop, he was spun round by an opponent, which cost him several places. Despite that, the partnership then staged a magnificent charge through the field, as Maggi and his co-driver made good no fewer than 16 positions. A 17th-place finish was enough for Maggi to score three more points in the Junior championship.

The grand finale to the 2018 ADAC GT Masters will take place in two weeks’ time (21st – 23rd September) at the Hockenheimring. Maggi intends to use the last two races of the year to once again apply the knowledge and skills he has acquired to achieving more points-scoring results.

Giorgio, the start to the sixth race weekend did not go quite as you had hoped…
Unfortunately, it rained in two of the four practice sessions, and in any case, four sessions are not enough to get to know a track like the Sachsenring. We would have appreciated a test day in advance, but unfortunately, we weren’t given that opportunity. The car felt good in the rain, but we at least had a basis on which we could work. When the weather dried up, I was actually having difficulties with understeer and oversteer. We experimented with the set-up, and the car was then much better balanced in qualifying.

In the first race, your progress through the field was halted. What happened there?
Christopher was very good in the first stint, but towards the end he had problems with the grip on the rear wheels. We adjusted the tyre pressures during the pit stop, and in the first half of my stint, the balance was OK. After that, I was struggling a lot with the car. The tyres were already pretty worn at that stage, and I guess I took them past their limit trying to stay close to the cars in front while having to defend against the cars behind at the same time. That was a bit disappointing.

Sunday got off to a pretty chaotic start for you…
Unfortunately, I was unable to get a clean lap together in qualifying. On the first start, I came out of Turn 1 with good momentum, but then the race stewards halted the proceedings. On the second start, I went past a few cars on the outside right but was forced into the grass in the process. Even so, everything was going well for me until the first corner where chaos erupted ahead. The Ferrari spun in front of me and stalled. I then got a nudge from behind which pushed me into the Ferrari. I lost some positions as a result. But the car was surprisingly good afterwards. The Honda is really sturdy, because that contact was by no means negligible.

Ultimately, though, you came away with more points in the Junior class…
After the safety car went back in, the race settled into a pattern. I was in no position to challenge the front-runners, but at the same time, there was nobody within striking distance behind me. When the next yellow phase began after the pit stop window had opened, we decided to come in for the change of driver. Coming out of the last corner I got hit from behind at the entrance to the pit lane and was spun round. We lost an awful lot of time because of that. Christopher then put in an excellent stint. All in all, it was a very difficult race. P17 and the points towards the Junior championship come as something of a consolation.

At Hockenheim, you have the opportunity to round off your season with a good result …
I’m looking forward to the Hockenheimring, because I know the track well. The practice sessions there should enable us to do better work on the setup of our Honda than at the Sachsenring. I think that we can reasonably look forward to more points at Hockenheim. The two races there will certainly be exciting, because the Hockenheimring with its hard braking zones is ideal for racing. Also, there should be more fans from Switzerland as well as some of my sponsors and family members watching the action. So it’s a bit like a home fixture for me. On the other hand, of course, it’s the final race weekend, which means the end of the season. That’s why I have rather mixed feelings.