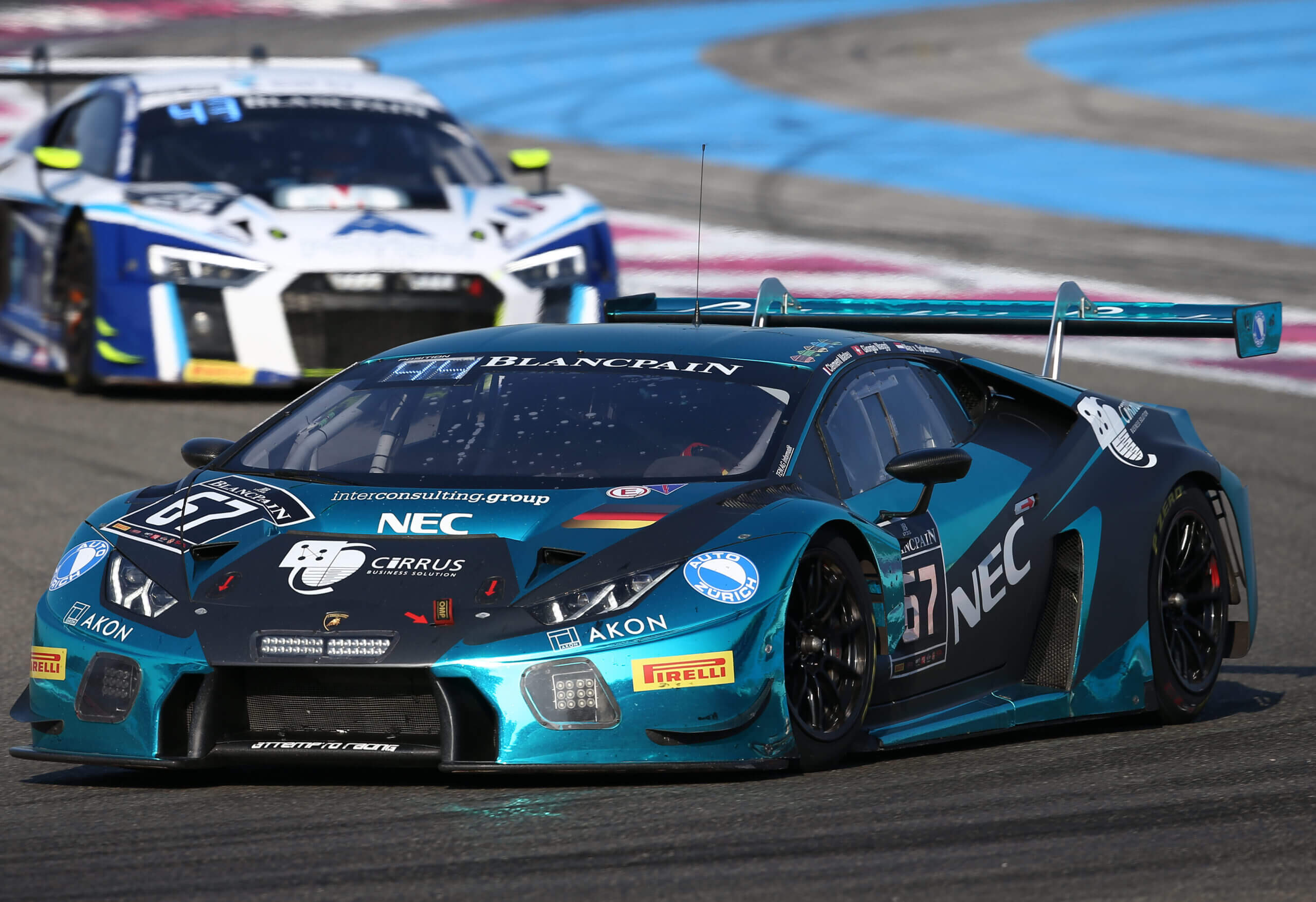 A double start while facing temperatures of more than 30 degrees Celsius requires a huge fitness level of any racing driver. But it was no problem for Giorgio Maggi, who during the last weekend at Paul Ricard competed in the Lamborghini European Super Trofeo as well as in the 6 hour race in the Blancpain GT Series. “I was very well prepared and everybody was quite surprised that I was not even sweating after practice and the races”, the young Swiss was slightly amused. “I was completely dry – I guess that shows quite a good fitness and endurance level. And that I had!”

In the European Super Trofeo Maggi for the first time competed for the ArtLine Team Georgia and immediately made an impression. So, team manager Harald Schlegelmilch, a successful former racing driver himself who made it up into GP2, already considers a longer cooperation: “I was very happy with Giorgio’ s good performance in our Lamborghini Trofeo, we will most likely talk to him about further races. Also team owner Shota Abkhazava war impressed – and not only by Maggi’s performance on track: “Giorgio is a fast, polite and well-educated young guy. I would be very happy to work with him again in the future.”

Maggi raced together with the young Russian Sergey Afanasiev, who already showed a good pace during the first two races of the On Saturday the duo achieved an impressive fourth place in a field of 31 competitors. In Sunday the Swiss driver was able to hand over the Lamborghini in P8 to Afanasiev. But when the Russian had just made up two further positions, an opponent drove over his left rear wheel, causing a broken driveshaft which meant an early retirement. Nevertheless, Maggi in general was absolutely content: “I was very happy to have been able to race for the ArtLine Team on such a short notice. It was my first start in the Lamborghini Super Trofeo at all and I had to realize that there is a rather big difference between this car and the Huracan GT3. It has got more horsepower, but driving wise it is a bil more unstable. So, I first had to get used to the Lamborghini Super Trofeo and on Friday I still was not really up to speed. But from Saturday onwards things went really well, and our fourth place in the general classification of course raised our hopes for Sunday even higher. Unfortunately another driver then destroyed our hopes of a podium finish.”

Things were not going so well in the Blancpain Endurance Serie. As all the other Lamborghini teams at Paul Ricard Attempto Racing had to fight smaller and larger problems over the whole weekend. Team manager Nancy Kahnt commented: “It looks like the devil lies in the detail. It was really a very bad weekend for us, not getting to grips with the car and then being hit by even more bad luck during the race. Losing the number 66 due to an engine failure in lap 66, while the number 67 already had to retire at lap 26 due to electronic problems after having to deal with a broken radiator already before was quite harsh. It ended the weekend in a bitter way, a weekend in which we actually had started rather hopeful. Now we have to work hard together with Lamborghini to do some fine tuning towards the set-up and to find out the reason for the engine problems until the Spa test day next week so we can be back at the season highlight, the 24 hours of Spa, in full strength.”

French bronze driver Clément Mateu, confirmed this impressions: “We tried a lot of different set-ups with the engineers, adapted our tyre pressures, worked with an updated software – but nothing really helped. We were actually getting nowhere. Something was just wrong…” In general, it did not seem to have been the weekend of Lamborghini: “Out of 15 GT3 Huracáns only five finished the race after six hours. I really tried everything to improve our times, but there was just nothing I could do. Attempto Racing as all the other Lambo teams put in a lot of effort, but everybody was just puzzled what was going on.” But as the general idea is still that the reasons for all the problems might be only small details.“ I hope Lamborghini can sort them out until the official test day for the 24 hours of Spa at 4th of July.”